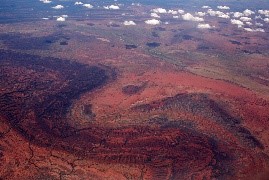 “File:Australia 9111.jpg" by Mike Switzerland is licensed under CC BY-SA 3.0

The desperate thirst of the Todd,

Giles and Gosse and Madigan,

Carved the land with camel tracks –

men who lived to discover

what had always been where it was.

shot their camels where they stood.

tombs of waterholes and hills.

immortalised in lead and bronze –

Oh! How his beard glints in that painting!

How his teeth shine in that song!

The ghost gums bow in sorrow,

the river cuts her hair.

listen to her cry –

And you must dig,

dig for your life!

fist over fist, without pause for thought.

Dig until the coarse river sand

until bone gives way to earth –

flayed knuckles yielding to some sudden

[1] An Arrernte name for the Todd River. There are other names for this river in Arrernte, but the name Lhere Artepe is commonly used in and around Alice Springs.

Gretel Bull is a writer, artist and mother, living and working in Mparntwe/Alice Springs. Influenced by Jungian theory, her work explores the reciprocal influences between history, mythology, person and place. Gretel’s poem, ‘Highway to Utopia’ was published in Campfire Satellites: An Inland Anthology (Ptilotus Press, 2019) and she was recipient of the 2019 Arts NT Varuna Fellowship.