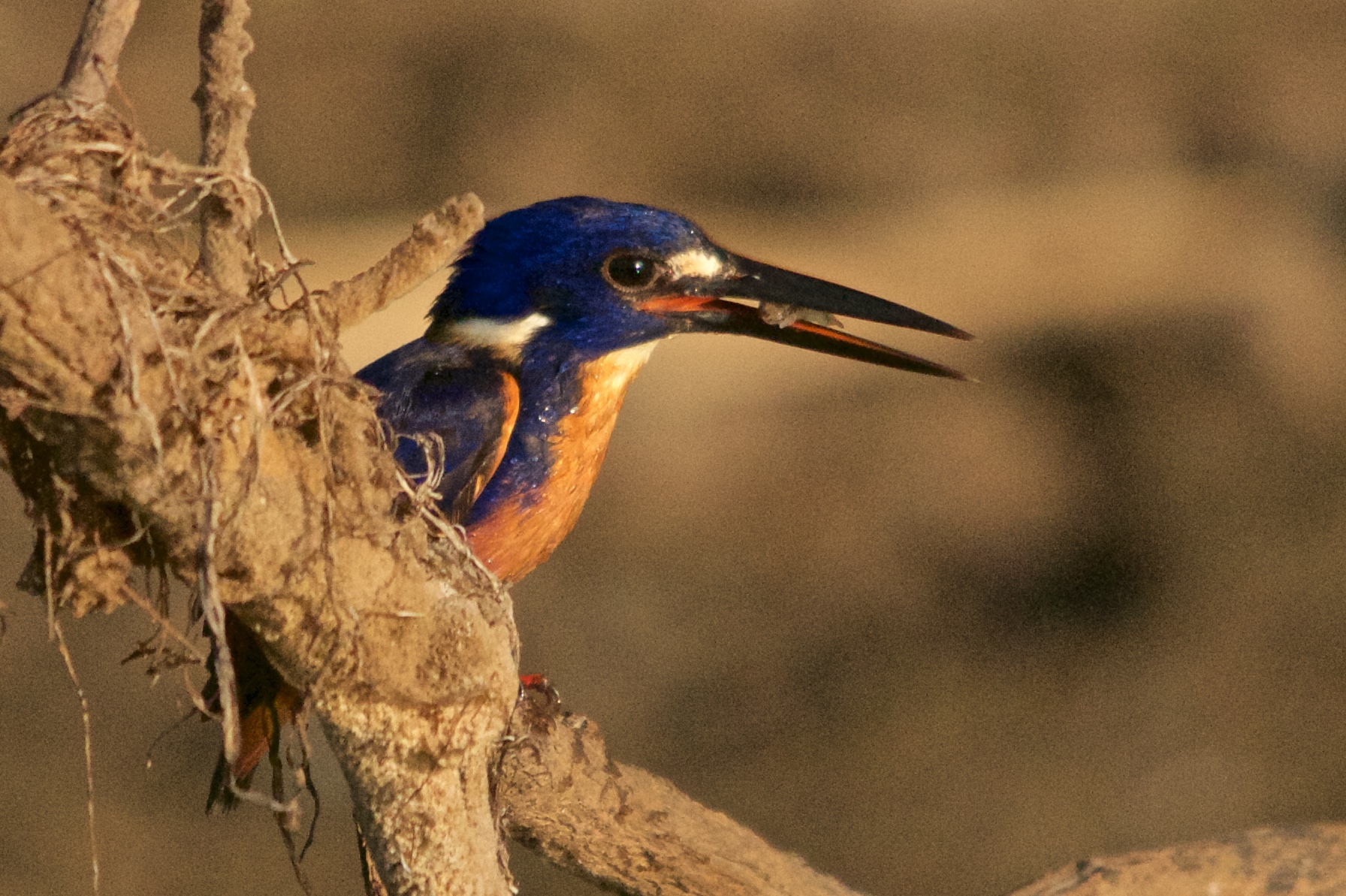 ALL THE THINGS never said between us live like heaving rain clouds over my head. When we were together, we got snagged on the many small trivia of everyday. Bogged down. Words and their purpose were lost.

On a good day, I imagine you as a kingfisher, perched at his lookout. Dazzle of blue chipped from a faraway place, a different piece of sky. Distant. If we had been given the time to know each other better, maybe we could have been different friends, different lovers. Different altogether.

Now, our shared memories visit me sometimes, unattached to you as I am. Our fishing trips. The camping holiday. That disastrous stint in Tennant Creek…when I found out I was pregnant and, on the same day, that no doctor prescribed abortive pills to a woman wanting an abortion in the Northern Territory: I had to go to hospital in either Darwin or Alice Springs. I was still ‘fresh off the boat’ in those days, the country I had come from had not prepared me for the ways of an outback place.

WE MET IN KATHERINE, a month into the build-up. On a sticky hot day I had taken my book and my bathers down to the springs and sat in the shade. The water was refreshing, beautiful, clear, swirling around parents and children noisily enjoying themselves. I had found a ten dollar note in the water – this had to be a good spot. Then the shade grew cooler and half a dozen men were in the water, cheerfully drinking beers. And you were the one who spoke to me.

Yes, I was staying in a backpackers’ and looking for work. No, I was not a teacher. I sounded funny because I had grown up overseas and only been back in Australia a year. My family were all in Victoria.

A casual, unexpected meeting of two strangers. Nothing out of the ordinary perhaps. Each of us carrying our lot of secrets, lies and disguises, and untold dreams that couldn’t possibly matter on a hot day by the river.

At first I thought you were part-Greek but as it turned out, you were part-Italian and part-Aboriginal. We stayed in the water until the dark crept over us. We had drifted toward a deeper pool to avoid other people. And then you walked me back up to the road and we decided to meet later on.

After dinner, we drank beers, seated on the back of your ute, under the stars by the Katherine river. We had sex on the backseat and I washed you off my legs in the water. Then you shone a torch over the surface of the river and showed me too many gleaming red eyes.

Tennant Creek was a hot hell, all dust and prickles. And you took off with no warning, leaving the door of our room open to the flies.

Barely a month or so after that, I packed in my job picking mangoes (the original purpose of my trip up North) and climbed into your four-wheel-drive again with my only belongings. We were going down the track to Tennant Creek.

By this time, your missus knew about me, I knew about her, and about your two kids and I knew you were complicated. It was unsettling, like taking a wrong turn and getting lost. But I decided I would be fearless, have this adventure and see where it took me. Driving along we saw cattle ramps, termite mounds covered in clothing, buzzards and crows taking off at the last minute and wallabies at dusk.

Tennant Creek was a hot hell, all dust and prickles. And you took off with no warning, leaving the door of our room open to the flies. My periods had definitely stopped. It felt like the end of the world.

Reckless by this point, I moved to a share house in Darwin and worked as a receptionist in a brothel, to pay the medical bills necessary to carry out an abortion. I was told I would undergo the termination once I was twelve weeks gone, because there was a waiting list. The doctors in charge of performing the operation were fly-ins, only available twice a month.

JUST BEFORE CHRISTMAS, the city felt like a cesspool of humidity, smells and noise. The smell of frangipani, full drains and traffic. Noises in the night, of rain, frogs, and some eerie screeching bird I could not hear without the back of my neck starting to crawl. There was mould everywhere. The house had many cockroaches and geckos and I was heartbroken to find baby geckos squashed by a drawer or the fold of a door. Whenever I found one I couldn’t help thinking of the phrase “the quick and the dead”. I was wishing I was home.

My breasts were swollen and painful, I was bloated and sometimes queasy. I no longer cared for bananas or chocolate—usually my favourite foods—and a green pawpaw salad from a stall in Rapid Creek had given me stomach cramps.

She hated me bluntly, like no other woman has ever hated me before, or since.

The job in the brothel was a vivid taste of society’s underbelly. While I worked there, one of the girls had gotten fired for letting a guy pay her with ice, and two people had been stabbed in drunken rows during the night shift. I was only working days; bad enough answering texts and calls for the girls, and cleaning the rooms. I hardly missed the place once it got dark. But the pay was good.

I was relieved when my brother came to visit for Christmas. He didn’t stay for long but seeing him brought back a sense that I was not alone, that I had family and friends to help me during the hard times I had walked into. I couldn’t tell him everything – that your missus was very viciously sending me texts and calling me through the night, that I was seeing you again. The colourful language in those text messages and calls was so graphic, so shockingly aggressive. She hated me bluntly, like no other woman has ever hated me before, or since.

The start of a new year, and I was stuck in the Territory, experiencing pregnancy, muggy heat, tropical rain, violence, crude language, the world of sex-workers and their clients, and the careless disdain of doctors for a lonely white woman who had believed Australia was part of the 21st century. Not much reminded me I had come here on holiday.

WHEN IT WAS ALL OVER, I moved to Alice Springs. I loved that town as passionately as I had hated everywhere else I had been in the Territory. We were no longer in contact, the abusive phone calls had ceased. I had a nice job and a lovely network of people around me. I sang in a pop choir. Why did I still think of you? The desert was a daily reminder that hard lessons learned are never forgotten. The hardier the plant, animal or rock, the longer it sticks around; evolution was learning and adapting fast from any mistake.

And so I keep memories of you stored away, as we used to keep snapshots and postcards. To remind me of the mistakes I made about you. Like a collection of feathers to represent the sightings of different birds. Brown ones for all the whistling kites of fishing trips. Blue and green ones for the gorgeous ring-necks of Tennant Creek. Emu feathers for the spinifex plains, tawny grey ones for curlews, the huge-eyed night callers. Black and white peewee feathers for the city’s electric wires. A landscape of strange colours, startling calls.

My favourite memory is from Kakadu. There is no feather for that one.

You had thrown lines in a bend of the river, we were alone and naked in the sunlight. It was midday and I was trying to cut up vegetables on the tray of the truck, but you were behind me, gently moving in and out. Laughing.

Suddenly the line pulls. It’s something heavy, you drag it up and steady the line around a branch. The catch is ugly, a huge mouth with twitching whiskers. We can’t eat this, it’s a catfish.

Back in the water it goes, still angrily tugging on the line, panting as you pull it over the sand, back to the river. The only thing we ever caught and, with no regrets, we let it go.

Emily Morgan studied literature in a small town on the coast of Wales, where she discovered poetry, creative writing and feminism. She was born in Switzerland and remembers growing up in Canberra, before her family moved to France. She lives in Darwin.