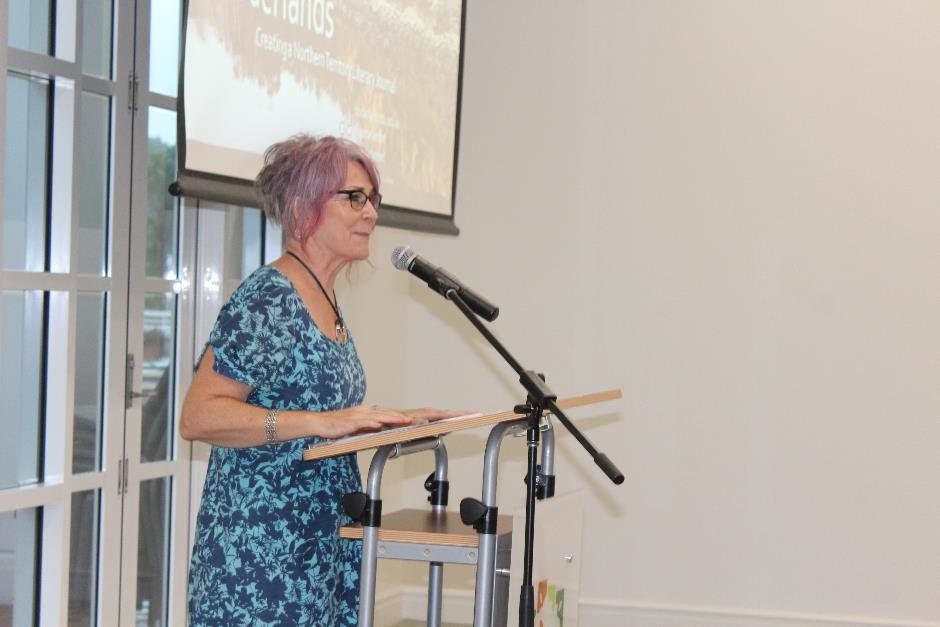 Earlier this year, The Borderlands Project launched a campaign to raise funds so that all contributors to the magazine would be paid Australian Society of Author rates for their work. We were thrilled to have critically acclaimed Northern Territory writer Mary Anne Butler as our guest speaker.

Below is the transcript (lightly edited for style) of her speech.

THEY SAY IF YOU WANT A JOB DONE WELL, then choose a busy person. In mid-2015 Borderlands founder – the very busy Glenn Morrison – approached me to discuss the concept of a Literary Journal. Following that discussion he asked me to write a letter of support for his funding application for stage one of his concept.

During that initial conversation it quickly became apparent to me that Glenn’s intelligence, vision and tenacity were formidable forces; and while that initial application was not successful, Glenn took on the feedback and advice offered by the grants panel, teamed up with two other intelligent, tenacious visionaries – Dr Adelle Sefton Rowston and Raelke Grimmer – and together they reconfigured the project and reapplied for funding. Their success in that funding round enabled this team to engage in a comprehensive scoping and planning phase and I’m aware that this scoping process involved many steps, including:

The latter is significant. Across its sixty-plus years of publication, Westerly has garnered a strong international reputation, and is listed in some of the world’s major cultural indexes. It has been instrumental in establishing and profiling the careers of major Western Australian writers such as Randolph Stow, Dorothy Hewett, Elizabeth Jolley, Tim Winton, Kim Scott, Sally Morgan and poet John Kinsella. Some of these internationally renowned writers got their first writing opportunity through Westerly. And that first paid job is hugely significant for any writer.

…with each piece you write, you come to understand a bit more about how and why you write.

I still remember the first time I was paid to write. It was around 1996 and I was commissioned to write an article for the Queensland Writer’s Centre magazine. I was paid ‘industry rates’, which seemed a massive amount of money at the time. I remember holding that cheque in my hands and wondering whether to cash it in or frame it, because it felt so much more than money. It felt like the dream I’d had for so long had the first inkling of becoming a reality. It felt like validation, and possibility. And for the first time in my life, I felt like a ‘real writer’.

But – mostly – it was encouragement enough for me to keep going. And that’s the whole point, as a writer. The encouragement to write the next piece and the next piece and the next, and with each piece you write, you come to understand a bit more about how and why you write. Your voice grows and develops and evolves, and you begin to believe in your capacity as a writer, and so you keep going and – hopefully – this persistence becomes a self fulfilling prophecy and then before you know it you’re Barry Jonsberg winning the national Indie booksellers Award, or you’re Marie Munkara winning the David Unaipon Award, or you’re Sam Carmody winning the Readings Prize for New Australian Fiction, or you’re Jo Dutton being shortlisted for the Western Australian Premiers Award.

And all this because at some stage, someone took a risk on you and you got your first piece published at industry rates and felt – for the first time in your life – like a ‘real writer’. And this – in a nutshell – is what Borderlands will do for the NT’s writing and storytelling community. Encourage new voices. Grow them. Endorse them. Pay them industry rates.

THE LONGER-TERM SUCCESS of Borderlands depends principally on two things. For it to evolve into the highest standard of literary journal warranting local, national and international attention, it firstly requires a host of high-quality writers to contribute their voices. Fortunately, the NT celebrates a plethora of these: poetic voices, academic voices, political voices, culturally and linguistically diverse voices, humorous voices, philosophical voices. Each of them unique. The range and power of the NT’s writing and storytelling community is extraordinary, and the broader literary landscape needs to hear these voices and stories.

The Borderlands team has worked hard… but it needs ongoing support; which is where we – as a literary-loving community – come in.

The second requirement to ensure the success of Borderlands locally, nationally and internationally, is securing solid and ongoing financial security. The Borderlands team is committed to paying writers industry rates for their work, thus helping to fund an entire ecosystem of literary growth across the Northern Territory – building economic, social and cultural capital. The journal aims to publish storytelling not only in text, but through photojournalism, oral storytelling, images and video – thus ensuring equity and access for a broad range of writers and audiences while also alerting the rest of the nation to the strength of the NT’s stories, voices, culture and unique lifestyle. The Borderlands team has worked hard to obtain funding and supportive partnerships in order to get to this stage, but it needs ongoing support; which is where we – as a literary-loving community – come in. In true Borderlands fashion, I was offered an industry fee to speak at this fundraising event today – and to kick-start the fundraising, I’m donating my fee back to the project. Because somewhere in the NT – maybe somewhere in this room – is a writer who is just starting out. Maybe it’s you. Maybe you’re just learning to find your own unique voice, and maybe you get published for the first time ever in Borderlands, and you get paid industry rates, and you feel for the first time like a ‘real writer’, and you hold that first virtual cheque in your hands – unsure of whether to cash it in or frame it. And I’d be proud as punch if I thought that my donation played even some small part in the publication and validation and ultimate growth of your unique writerly voice.

So please – if you can – dig deep into your pockets for this one. Because it’s so much more than a cheque. It’s a dream, becoming a reality.